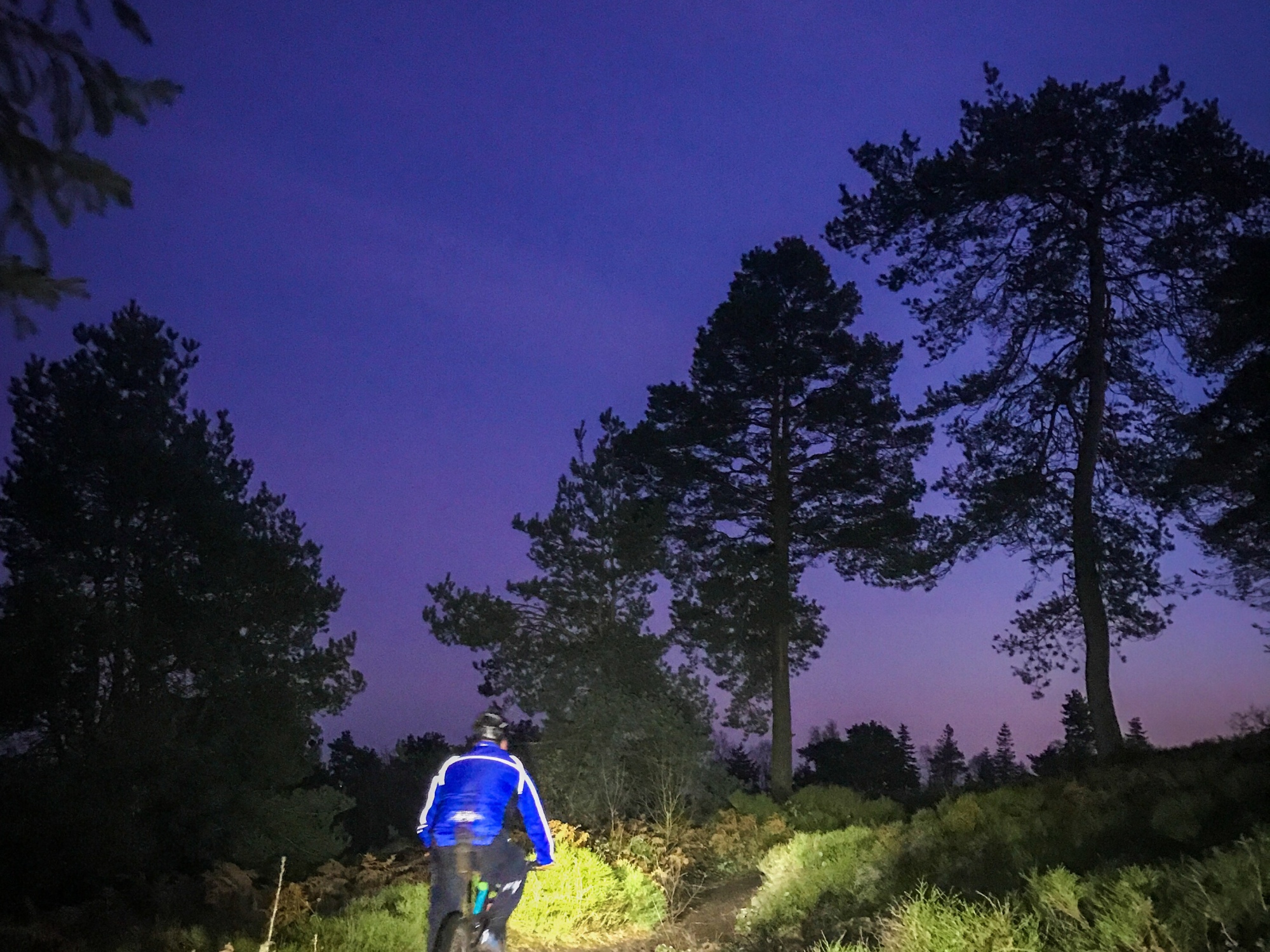 I’ll be totally honest. The real reason I wanted to try night time trail riding was because it seemed everyone else was doing it. Once a capable mountain biker, the next step within mountain bike culture seems to require the parting of a small fortune on a rugged-ass 2,000,000 lumen bar-mounted light, then heading off into the woods after dark. I didn’t fully understand the appeal, but I needed to put something on my Christmas list and a fancy light sounded like something I could brag about. One rugged-ass 2,000,000 lumen bar-mounted trail light please Santa!

The LifeLine Pavo 2000 lumen was the one St Nick chose to drop in my sack. One hour, 50 minutes at full beam, or varying burn times at lower settings. It doesn’t offer quite the same plane landing abilities as an Exposure, but at around a third of the price, the reviews were all positive, and it looked rugged enough to knock a good dent into any oncoming tree! The LifeLine is super easy to install – twist and click into place – with one simple on/off button up top that toggles through the 4 brightness modes, or press and hold for 4 flashing modes. My trail buddy Tom had also received a new light in his Christmas stocking, so the pair of us headed to our local hills after sunset to give our new toys a try.

Neither of us had intended to ride anything technical, and were anticipating a fairly tame ride on bridleways with the odd easy downhill thrown in. I’d perhaps wrongly assumed that if you typically ride red graded trails in daylight, your night riding would take place on the blue stuff, owing to a lack of peripheral vision and judgement of depth. But we couldn’t help ourselves. We had to veer onto a downhill trail just to see what we could see.

It turns out, you can see a heck of lot! The combination of a 2000 lumen mega-beam wherever you point the bars, and 700 lumens mounted up top, meant there wasn’t much of the trail I couldn’t see. The tunnel vision contrasted by darkness to either side made for an encapsulating ride. Any slight nervousness encountered from not being able to fathom the scale of the drop to the right of you, is overridden by visual signals to the brain saying “Nothing to worry about. No drops in sight!” I found I could clean the steepest sections I’d bottled the week before, needing only to tackle the immediate 2 to 3 metres that I could clearly make out, rather than focusing on an impossibly steep 40 metres straight down to a busy A-road. Arse over real wheel. Heels down. Feather the brakes. 2 to 3 metres at a time. Simple.

We pedalled across the hills and through woods, bringing to life sections of trail that we’d otherwise snub our noses at. The uphills became interesting and the downhills became awesome. But ultimately, I think the best feeling came from claiming the trails as our property (if only for an hour). There’s an overwhelming sense of satisfaction that comes, knowing you’re one of a small few who venture out when everyone else is putting on their pyjamas! I’m certain we were the only souls out on those hills that evening. And looking down on the lights of Birmingham under moonlight, these two smug bastards knew they were winning!